The article compares the settlement organization and the building construction on flat sites consisting of no more than 2-3 levels and on multilayered settlements with deposits that are above 0,50 m in thickness. The possible differences in the occupational stages of a given site are discussed – from the clearing of the terrain for its foundation to the characteristics of the archaeological record.

The differences between the two types of settlements are due to the different bases on which they are founded – the former over a natural terrain, the latter over the remains of older settlements. The area for the newly established settlements needs to be cleared from vegetation – usually perennial trees whose removal leaves deep pits. The area of the multilayered settlements needs to cleared from destruction debris, namely through surface flattening. The role of the terrain is particularly important for the construction of the buildings. If they are founded on a solid base, it is not likely that the weight of the building will cause any problems. This facilitates the construction of large massive buildings. The buildings of the multilayered settlements are lying over an amorphous ‘fill’ layer with low and uneven density. Such a layer is not suitable for heavy buildings since it sinks under their weight. This imposed the construction of lighter buildings.

The flat sites could cover a large area with sparsely situated dwellings. The space between the buildings was most probably used for household and subsistence activities. Light buildings, hearths, ovens and pits with various functions can also be situated there. The tells have a limited area, hence their densely built space. Probably most of the household and subsistence activities were performed off-tell.

The different location, organization and construction techniques of both types of settlement is reflected in the archaeological record. 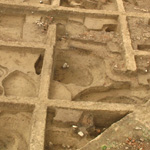