The paper presents a systematization of Greek amphorae found in Shumen district (northeastern Bulgaria). In terms of their origin and chronology, the amphorae from Shumen district have good analogues in the adjacent areas. The economy of the entire region (the east of Yantra river to the Danube and to the Black Sea coast) during the Classical and the Hellenistic periods has been related to the steady in times of upsurges and crises import of production transported in amphorae.

The largest diversity of production centres represented by imported amphorae in Shumen district is in the first half of the III century.

Although the collection of late Hellenistic amphorae and amphorae stamps from Shumen district derives from different sites, its diversity is comparable to the assemblages from town-sites like Kabile and Sboryanovo. This fact, together with other observations on the material culture, is a serious argument for the claim that wide majority of the population in ancient Thrace during the IV-II c. BC had relatively similar lifestyle, whereby the market and the trade with certain Greek partners have played a significant role.

The import of amphorae in the region continues in the II-I c. BC but much reduced in volume as it is visible from the finds from the adjacent area of V. Tarnovo. Despite these less intensive trade relations with Thrace, the Greek production centres remain popular there, at least till the arrival of the Roman administration. 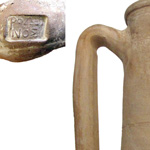