The artefacts presented here are ‘stray’ finds, as looters’ finds are usually referred to in Bulgaria. Due to their good preservation, they are valuable evidence for the cultural and economic contacts of their place of origin and belong to a relatively early period – the second/third quarter of the 5th century BC.

The amphora is entirely preserved and is 55.5 cm high, with a maximum body diameter of 29.5 cm and a rim diameter of 10.8 cm. It is made of brick-red brown clay mixed with sand and white calcareous particles. In recent investigations, these amphorae are associated with the production of the North-Aegean zone or Propontis and are found in closed complexes along the North Black Sea coast dating to the second/third quarter of the 5th century BC. The only so far (?) known parallel from the Thracian hinterland is a fragment from the upper part of an amphorae found in the rich burial from Svetlen (former Aazhljar) in Popovo district, dated to the end of the 5th century BC. The fact that the amphora is completely preserved suggests that it is a part of an inventory of a grave with a stable (stone?) construction. The amphora was donated to the Popovo museum and recorded as deriving from the area around Popovo.

The lekythos is almost entirely preserved. Only a small fragment from the base of the neck is missing. It is made of fine beige clay with an orange nuance. The surface is covered with a fine slip (engobe) of the same clay. There are some traces of white paint on the body, that is over-painted with several bands of black-glazed geometric and plant ornaments. The base is entirely covered with black glaze. The rim and the outer side of the handle are also covered in black glaze that is thicker and has a metallic lustre. The lekythos is 19.2 cm high, with a maximum body diameter of 6.5 cm, a rim diameter of 3.96 cm and a basal diameter of 5.2 cm.

The lekythos belongs to the well-known group of Attic lekythoi with black-glazed decoration over a white background from the 5th century BC (Attic White Lekythoi). According to its shape, it belongs to type ІІ (Shoulder) and, according to its decoration, to the group of Pattern Lekythoi from the production of the Beldam Painter or his workshop, dated to the second and third quarter of the 5th century BC. These lekythoi are common for the necropoles of the Greek colonies and their hinterland along the North, East and West coast of the Black Sea and are dated to the third quarter of the 5th century BC. The excellent condition of the lekythos suggests that, like the amphora, it was a part of an inventory of a rich grave from the region of Popovo. 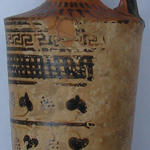