The Chalcolithic tell Hotnitsa was excavated for the first time in the ´50s of the 20th century. Even then remains of a massive fortification were found in its southern periphery. Following a long break the archaeological excavations were renewed and continue to the present day. The current study summarizes the results from the research of the enclosures during the last seasons (the period since 2009 till 2015). Their construction and chronology have been clarified to a large extent. It has been established that the southern part of the tell is protected by a complex fortification representing a rampart and a palisade built on it. A stone build-up was found in some sections. A ditch was very likely dug in front of the rampart. Most probably this enclosure protects the middle chalcolithic layers of the tell. A trench (found during the 2015 season), attesting to the presence of a massive palisade built in the southern periphery of the tell. It is located behind the remains of the rampart. Most probably it was built later than the rampart and it protects the last late chalcolithic layers of the tell. The excavated enclosures are similar to the ones, discovered during the research of a number of chalcolithic settlements, located in Bulgaria. The research of the enclosures in Hotnitsa enriches to a great extent our knowledge of architecture and fortification constructions during the Copper age in the Lower Danube region. 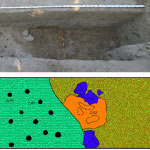