This article is focused on the problems related to cut- and thrust weapons, their constructive elements and applications and their parallels in Northern Europe and Scandinavia dated between the 9th and 11th centuries, found within the present-day Bulgarian territory. An attempt is made to trace the paths and discover the reasons which brought them to the Balkan Peninsula. The chances of finding North European weaponry artifacts on the Balkans vary. Evidence of various relations can be found in medieval Byzantine written sources – from well-armed Varangians and military units from the North, to trade relations between Vikings and the Eastern Roman Empire. It is well known that Scandinavians during this period traded mainly honey, wax, precious animal furs and probably some armament elements. So the availability of North European armament elements in Bulgaria may not be evidence only of the presence of military units, or of Varangian military campaigns toward the Balkans, but also of trade contacts with Constantinople. The manufacturing of local Balkans imitations of some North European elements of armament is also possible. Even now, there is a lack of data regarding the manufacturing of imitations within Bulgarian territories.
The presence of Varangians within the present-day Bulgarian territory is evidenced mainly by items related to military armament and weaponry. This article pays particular attention to the development of the so-called „Nordic art styles“, whose traces are most clearly observed on the ornamentation of weaponry of North-European origin. The research on findings related to weapons for close combat (so-called „Cold weapons“) of Scandinavian origin in Bulgarian lands is of particular importance for the study of the Early Medieval warfare in the Lower Danube area because this type of artefacts makes up a large part of the arsenal of cut- and thrust weapons found south of the Danube and dated to the period between the 9th and 11th c. 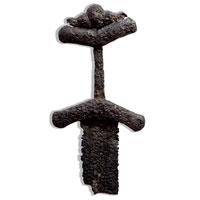