Decoration Analysis of the Pottery Assemblage from Devnya Settlement

The aim of this paper is to analyse in more detail the ornamentation of the pottery found in the Devnya settlement. It was excavated as part of the rescue excavations of the known Early Medieval cemetery Devnya-3. According to the leader of the excavations Ivan Ivanov, the settlement contains one layer, which is 20 cm thick, and according to the materials found, belongs to the Late Eneolithic period. It is very important to analyse the pottery because it comes from one of the few excavated settlements from the region of the Varna lakes. The region falls within the area of the Varna culture, known mostly for its cemeteries, but we know much less about the settlements in general.
All of the 1,282 samples known from the settlement were analyzed and decoration was found on 685 of them. For the purpose of a detailed examination, the pottery is classified on the basis of the technique of decoration. The following information on each of the techniques is then presented: technological implementation; on which types of vessels and on which parts of the vessels is each technique found; which other techniques it is combined with; in which variants/motifs it is found or which compositions it forms. The results from the analysis show that all of the techniques are used with a clear purpose. They give us more valuable data about the characteristics of the pottery of the population that inhabited this region and also of the Varna culture. At the current state of research, it appears that the main features of the ornamentation of the pottery from Devnya are identical to those from the other settlements from the lakes’ region. Given the parallels at this moment, we believe that the pottery from Devnya could be dated to phase II of the Varna Culture, with a possibility of existing in phase I, at least in its final stage. 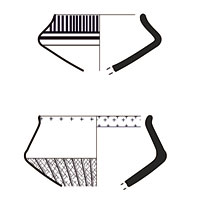