Arab-Byzantine seafaring in the Balkans and Eastern Mediterranean: the portrait of Leo of Tripoli and Damian of Tyre through primary sources

This paper aims at a re-examination of primary source material in order to unveil a clearer and more comprehensive framework concerning the Arab-Byzantine seafaring and warfare in the Medieval Balkans and the Eastern Mediterranean especially in Thessaloniki the largest Balkan city of the Byzantine Empire. Leo of Tripoli and Damian of Tyre, two well-educated and experts in naval tactics converted from Christianity to Islam and initiated massive campaigns – and not piratical assaults – in the Balkans due to the huge antagonism for thalassocracy in the Mediterranean Sea. In this study I argue that the Arabs as well as the Byzantines were acting with fairly lawful practices during their campaigns and the Muslim fleet has been on an equal footing with the Byzantine fleet only after the 3rd–4th AH (9th–10th AD) centuries. It is thus impossible to construe historical events related to the Arab-Byzantine seafaring without researching and analyzing Arabic sources. 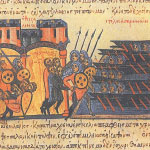