This study is an attempt to investigate the effectiveness of the early Byzantine limes in the northern Balkan region and its possible connection to stability and settlement development in the hinterland. Although this topic has been widely discussed in the past by a number of scholars, reconsideration of some theses and ideas, seen through the results of recent archaeological excavations, is needed. We believe that a detailed examination of the problems associated with existence, structure, permeability and security of the border will contribute greatly to asking the right questions about the overall fall and disintegration of the early Byzantine system of government and administration. Additionally, questions about the evident cultural decline are considered. Most of the issues concerning the limes are connected with the strategic reorganization of the defense of the Balkans. This is made for the better security of the local communities during their struggle for survival in a time of natural disasters, depopulation, constant barbarian raids and limited settlement of a foreign population. In the second half of the sixth and the seventh centuries, almost everything came down to self-sufficiency and survival through decentralization and local management of resources, production, and defense. Byzantium only formally retained authority over a part of the Balkan provinces, primarily through a number of strategic strongholds, mostly located offshore, on the islands and rarely inland. Only there the last remains of the urban elite and the military aristocracy survived. Purely formal authority over a large part of the territories conquered during Justinian`s reign indicates an economic downturn, complete disintegration of the administrative system and a collapse of the military and administrative organization in a great part of the Balkans. All the problems to be considered will be seen through the prism of the complex cultural, historical and socioeconomic framework of the period. 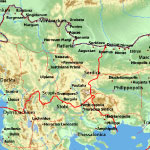