The manufacturing complex is located in the east part of the Roman province of Lower Moesia. The site near the village of Karavelovo, Shumen region was partially studied in the 1970s. So far the registered structures and the materials provided by the excavations in the ceramic centre were known only by brief information in the annual archaeological reports and by a preliminary report, which makes them almost unknown to the researchers. The purpose of this study is to clarify the chronology of the red-slip production of the centre near Karavelovo. It becomes clear from the publications on the issue that the kilns worked in the period from the 2nd to the 4th c. but because of absence of analysis on the ceramic material, the interpretations on the chronology of the ceramic production in the discussed centre sound unconvincingly. The analysis offered here points explicitly at the period from the end of the 2nd or the very beginning of the 3rd c. until the middle of the same century. Current and future researches in the area would expand significantly our knowledge of the production and use of the red-slip ware in the province of Lower Moesia. 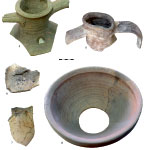