Ofrynio Toumba, an example of habitation in Eastern Macedonia (Northern Greece) in the Late Bronze Age

Ofrynio Toumba is a typical Late Bronze Age (1600-1100 BC) site located 60 km west of the city of Kavala and 2 km southeast of the modern village of Ofrynio in the Municipality of Pangaion, in Northern Greece. The geographical position of the tell on the west bank of the Strymon river, near the coastline of Orphanos bay and south of the metalliferous Mount Pangaion, emphasizes its geostrategic role and attests to its character as an important prehistoric settlement. Analogous sites east of the Strymon river are relatively rare unlike to what happens in central Macedonia, the valley of Axios, around the Thermaicos gulf, the Langadas basin and Chalkidike.
The systematic research in the field began in 2012 and continues to this day, under the supervision of the Ephorate of Antiquities of Kavala-Thasos and is supported financially by the Municipality of Pangaion and the INSTAP foundation (Institute of Aegean Prehistory). Excavation has already revealed important features, such as architectural remains, characteristic pottery of the Late Bronze Age, small artifacts mainly connected to the household equipment and a rich zooarchaeological material. The architectural remains (enclosure-apsidal building) unearthed till now, in the upper archaeological layer, are dated in the last period of the Late Bronze Age (LH IIIC/1200-1100 BC), according to the characteristic pottery.
Ofrynio Toumba will allow an opportunity to study a settlement of the Late Bronze Age in the coastal area of Eastern Macedonia, decisively contributing to the enrichment of the archaeological record of the area. 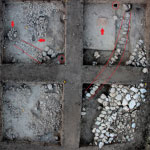