Amber in the Mycenaean world and in the Balkan Peninsula during the 2nd millennium BC: perspectives of an imported material

This paper focuses on amber finds in the Balkan area during the 2nd millennium BC. Amber beads reached initially Mycenaean sites in the 17th –16th c. BC. By the end of the 13th c. BC the material’s geographical distribution expanded significantly in the Peninsula, from Western Balkans and Greece to Bulgaria and Romania. Most beads dated to these centuries are of flattened globular and discoid shapes. There had been greater concentrations of the fossilized resin buried in a few tombs during the initial appearance period in Greece; in contrast to this, fewer amber beads have been discovered, in more sites though, in later phases – these beads are found predominantly again in burial context. The 12th c. BC threshold marks a significant differentiation as far as amber distribution and shapes are concerned related probably to the political situation of the period, the fall of the Mycenaean Palaces and the active role of the Italic populations in amber’s circulation. Amber beads are used for pendants, necklaces, belts or they are combined with other materials, eg. gemstones, cloths, metal artefacts. Amber seems to have assumed a multiple role in the Balkan communities as burial good, ritual artefact or material employed in societal manipulation, although contextual analysis is necessary in order to specify its functions at any site or in any community separately. During the last decades research has gained a new momentum encompassing the Northern Balkan countries into its consideration, even alongside the Mycenaean World; therefore, amber perspectives can be studied nowadays more elaborately. 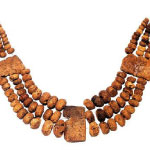