Comparing different models of complex settlements in Western Anatolia and Southeast Europe in the 3rd millennium BC: the question of urbanization

In the course of the 3rd millennium BC a higher social class differentiated itself for the first time in Western Anatolia and the Aegean islands from the rest of the society through the medium of settlement planning and the systematic use of personal luxury goods. Monumental architecture, specialized craftsmanship, administrative practices, regular caravan routes, and a wide range of trade goods were among the major innovations, which can be regarded as indications of an urbanization process in those regions, particularly during the second half of the 3rd millennium BC. While Western Anatolia and the Aegean islands underwent such an urbanization process, settlement patterns in the Balkan Peninsula remained unaffected from those developments. Some ideological elements, however, seem to have reached at least as far as the Thracian Plain in north-western direction, implying a connection between Aegeo-Anatolia and the Balkans, based upon individual groups rather than on regular caravan routes. Thus, the present paper deals with the similarities, as well as the differences of Western Anatolia, the Aegean islands, Thrace, and Western Balkans, regarding social patterns displayed on architecture, settlement layout, and personal wealth, with a special focus on the question of urbanization. 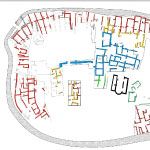