The Final Chalcolithic Age in the Central Balkans and the Rila-Rhodopes area is characterized by growth in the number of the mountainous settlements. This process has been a consequence of the so-called rapid climate changes in the end of the fifth millennium BC that affected negatively the way of life in the plain lands of the Balkans. The bearers of the Krivodol–Salcuţa–Bubani culture complex continued their typical way of life in the mountainous areas of the Balkans, but with a number of changes in their material culture which were mainly provoked by the intensive interactions between the Aegean, the Balkans and the Middle Danube. One of the main evidence for the intense contacts between the Krivodol–Salcuţa–Bubani area and the Southern Balkans is the growth in quantity of the spindle whorls and the appearance of a new type – the so-called “short conical” spindle whorls, in both areas. This indicates the increment of spinning’s economic importance and changes in the spinning technique in the whole wide area. The aim of this article is to establish the nature of those changes.
In comparison to most of the other Late Chalcolithic spindle whorls the “short conical” can be considered small and light. Such spindle whorls are suitable for spinning of short fiber raw materials – goat hair, wool.
The increment of spinning’s economic importance and the use of “short conical” spindle whorls are also characteristic features for the mobile stockbreeding Chernavoda I culture. The existence of mobile pastoral groups in the Central Balkan Final Chalcolithic cultures had been suggested long ago. So, it is reasonable to presume that the mobile stockbreeding model of those groups led to intensive use of animal fibers in their textile production. 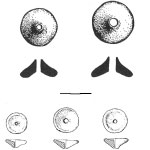