Lids are a seldom discovered type of Neolithic vessels, which explains the lack of analyses of this category of ceramic assemblage. This study includes 41 unpublished fragments found at the settlements Samovodene, Kachitsa, Hotnitsa-Kashlata, Hotnitsa-Kaya bunar, situated in the Yantra river valley, as well as Koprivets which is located in the Rusenski Lom basin. They reveal certain changes in typology and decoration throughout the entire Late Neolithic period (according to the Bulgarian chronological system – 5400/5300-5000/4900 BC), namely the Hotnitsa and Dudeşti cultures in the Lower Danube region, plus some Early Vădastra elements. The absence of any Boian-Bolentineanu traces is not surprising, considering its vague specifics and even questionable existence.
Most of the forms described come from Samovodene (34 pieces), as it is one of the few extensively excavated sites. The majority have cylindrical (with straight or bulging walls) and slightly conical lids with planar top surfaces. The few pieces from Kachitsa, the sites in the vicinity of Hotnitsa and the single from Koprivets show different shapes, characteristic of the very end of the period. Various ornamentations are encrusted with white or, at rare occasions, red, pastes. Moreover, due to the diverse decorations, every single fragment included has its own specific appearance. The lids from North Central Bulgaria, as well as parts of the ceramic assemblage, find their closest parallels in the Dudeşti and Vădastra material from the Western Muntenia and Eastern Oltenia regions in Southern Romania. 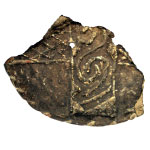