In Chapter 2, a synthesis of the major trends of prehistoric research in Bulgaria was made as more attention was paid to the issues discussed in later chapters. Many controversial and out-of-date concepts were not criticized, since they were made at a time of a specific ideological agenda and since a detailed critique of the interpretative framework of Bulgarian prehistoric research in the last 50 years is not an aim of the current study. To avoid repetition, some general reviews are made in a more relevant place in a certain chapter (e.g. the concepts for structured deposition are summarized in the section for approaches to material culture) rather than to include them in Chapter 2. Following the structuring principle of this research, in which chapter two is devoted to a general history of concepts and ideas, discussed in later chapters, rather than commenting on particular case-studies, a brief introduction to GIS in archaeology was also included in the chapter. GIS applications in archaeology that are relevant to this study and some general debates of the characteristics of the GIS studies are summarized in Chapter 3.

In Chapter 3, the theoretical basis of the study was formulated through the presentation of case study-based sections on each of the three main research components – landscape-material culture-society - structured as a discussion of different research topics commented on in later chapters (e.g. the concepts of landscape archaeology, structured deposition and site catchment analysis). This chapter includes references mainly from Western archaeological theory and practice, since a) Bulgarians have not contributed to the overall debate of the issues discussed in the current study and, b) the established Bulgarian interpretative framework was presented in chapter 2.

In Chapter 4, the environmental characteristics of the three microregions are presented. Special attention was paid to the pollen data from Bulgaria, which is the only readily available source for palaeo-environmental reconstructions.

In Chapter 7, the sites in Drama microregion have been studied in the same way.

In Chapter 8, the final fourth level of analysis was conducted, in which the data from chapters 4 - 7 were incorporated into a general reconstruction of settlement dynamics and occupational sequence for the later prehistory of the three microregions. Here, the three microregions are put in a broader context of the social networks current in the Neolithic and Eneolithic of the Southern Balkans. The social aspects of prehistoric development in the study area is developed on the basis of my new studies of material culture and society and as a challenge to the prevailing cultural historical approach in Bulgaria. There is an attempt to use the recapitulation of the concept of social practices as providing the basis for social transformation and giving alternative explanatory units such as social networks in opposition to the current dominant notion of archaeological cultures. Landscape as an integral part of the past reality is presented in terms of its constraining and not deterministic role in the settlement and spatial patterns of the study area.

The main points arising from the complex, inter-disciplinary investigations are recapitulated in the Conclusions. 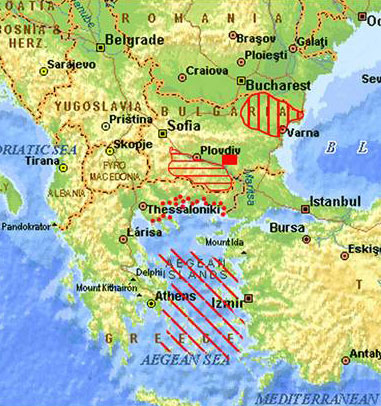